Dr. Thaw is a character in Gadget and the Gadgetinis. He is Dr. Claw's brother who only appeared in "Ice Folly," in which he paid his brother a visit and argued to see who could defeat Gadget quicker. All the same, he has a rivalry/connection with his brother, that is indeed quite curious.

He was Later Mentioned in episode that he was Billy's Father

Just like his twin brother, Thaw is an evil and menacing criminal mastermind who is trying to take over the entire world. Despite being as equally ruthless, arrogant, sinister, and sadistic as Claw, he shares quite a bitter rivalry with his brother to take over the world. It is quite debatable whether which brother is the most evil, due to Dr. Claw's recent comical behavior in the 2015 Netfilx series.

Just like his brother, his face is hidden most of the time and the only parts we see of him is his red rubber gloves and boots. Though, there are some scenes where we can see at least a shadowy version of his body whenever he is conversing with his brother, the same with Claw, on the show. When his shadowy form appears, he appears much more bulky and larger than his brother, with bulging muscles and a stocky frame. He has a watch-like device on his right hand. 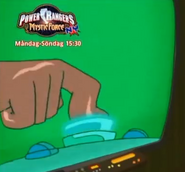