Gadget Model 2, better known as G2 for short, is the deuteragonist of Inspector Gadget 2. She is Inspector Gadget's upgraded female counterpart whose gadgets and investigation procedures, unlike Gadget's, work flawlessly in contrast to the original as his usually malfunction. She also becomes Gadget's 2nd love interest since he ended his relationship with Brenda Bradford before the beginning of the 2nd film.

Not troubled like the older model, G2 appears to be an emotionless, unstoppable opponent of evil and constantly reject Gadget since she prefers to work alone.

G2 originally worked as a robot model replacement for Gadget while he had his glitches. Gadget tried to show her they can "work alone together", but G2 didn't approve of it.

At the end of the film, after Gadget reactivates G2, they work together with Brain to save Penny from Claw.

When the final battle ends, Chief Quimby and Mayor Wilson award the team for their heroism and Quimby decides to continue the Gadget Program to form an army of Gadget Models to improve strength of capturing Claw should he return. Quimby is also ordered to have Gadget and G2 on the case together for their heroism and their hats malfunction with beeping hearts, which makes them kiss and Gadget shoot fireworks out of his hat. However, as one of the fireworks explodes near Chief Quimby and the mayor, they both yell out Gadget's name in anger, implying he is now in trouble again.

G2 probably has all of Gadget's gadgets, along with some special abilities (like detaching her legs from her torso). She also has a boomerang gun, net shooters, and wrapping paper on a flying object.

At first, she is a robot incapable of emotions, but later, she gains a more human one. She is also kind, determined, brave, and faithful.

G2 has reddish-brown hair in a ponytail and she has blue eyes. She wears a blue policewoman hat with a uniform and blue boots, which is part of her body as well. 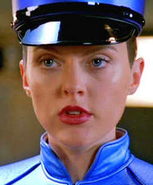 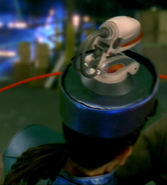