The Gadgetmobile, also spelled the Gadget Mobile, is Gadget's trusty car that he uses when he is on his cases in nearly every episode of Inspector Gadget. It closely resembles a Delorean

(in the original series) and is equipped with all sorts of gadgets.

In the Inspector Gadget film series, it is a talking male car with its own personality and mind. In Inspector Gadget 2, the Gadgetmobile is given a new look as a purple color instead of his former white color.

This vehicle transforms into 2 different modes:

Gadget uses this mode when he is usually out on a family trip somewhere with Penny and Brain (like the airport, for example).

Gadget uses this mode to solve his cases in. Unlike it's van mode, this mode is much faster. This mode has things like a robotic claw at the front to grab things with and some "hilarious gas" (which come out from the back), etc. The Gadget mobile flies in only one episode of Inspector Gadget, which is Inspector Gadget Saves Christmas 1991.

In the original series, the police car mode closely resembles early Lotus Esprit models, and the cars Gadget uses in the live action films are based on early 1960s Lincoln Continentals. In the 2015 reboot, the Gadgetmobile resembles a Fiat 500, and can also transform into a race car that looks a bit like a Porsche in the front. 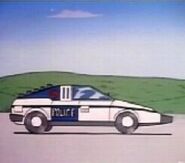 The Gadgetmobile raising its wheels to get a parking space

The Gadgetmobile being driven off a cliff

The Gadgetmobile in the 1999 movie

The Gadgetmobile in the sequel
Retrieved from "https://inspectorgadget.fandom.com/wiki/Gadgetmobile?oldid=14706"
Community content is available under CC-BY-SA unless otherwise noted.