M.A.D. Cat is an antagonist of Inspector Gadget. He is Dr. Claw's fat pet cat who schemes with him.

He is named after M.A.D., the organization run by his owner, and his species, a cat.

M.A.D. Cat is another way to reinforce the emotions of his owner Dr. Claw. When Claw is pleased, he snickers or laughs along with him, or for him. If Dr. Claw is annoyed always pounds his desk, he follows through with his terrible yowl. He is Brain's arch-nemesis as well. M.A.D. Cat also has a small doll of Inspector Gadget (character), which he "claws" at.

M.A.D. Cat is obese and has dark gray fur with black and white stripes, a white patch on the tip of his tail, and yellow eyes. In Gadget and the Gadgetinis, he is dark gray, has black stripes, and a brown-ish mouth and fatter.

M.A.D. Cat in the original cartoon

M.A.D. Cat as he appears in Inspector Gadget.

M.A.D. Cat as he appears in Inspector Gadget 2. 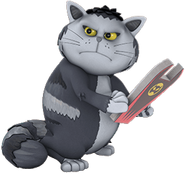 M.A.D. Cat in the CGI series

Add a photo to this gallery
Retrieved from "https://inspectorgadget.fandom.com/wiki/M.A.D._Cat?oldid=16146"
Community content is available under CC-BY-SA unless otherwise noted.