"Muahaha, magical! Abraca-BOOM!"
―The MADgician
"What!? He`s totally unpredictable! Sure, he`ll come up with a million ways to destroy Gadget, but each one will be more bonkers than the last!"
"He never makes sense because he`s totally random. He`s the MADgician."
―Talon and Penny

The MADgician is the secondary antagonist of the 2015 series. He is M.A.D. agent, whose primary goal is to destroy Inspector Gadget because of personal resentment.

The MADgician is a short man with a classic magician's outfit, shown to be the same age as Inspector Gadget (probably 40's). He's got bruises under both eyes.

His hair is combed in the same manner as Inspector Gadget. He wears a dark purple top hat, jacket, pants, white gloves and shirt, red vest and shoes, black belt with an M-like buckle. In the appearance of Baron, he wears a dark blue outfit, a smaller top hat, and a skull mask with red stripes.

In further episodes he has wrinkles around his eyes and blush on the cheeks, bruises were disappeared.

The MADgician has deep mental problems that have affected his character. So, he's obsessed with his magician character and with revenge on Inspector Gadget. He is always pompous, eccentric, often makes mad faces, trying to be hilarious, and refers to such behavior with pleasure. He seems to be very self-confident, arrogant, and not ready to give in to others and work with someone in a team.

He never forgives humiliation and enthusiastically will come up with many crazy plots in each of which he takes revenge on his offenders. If this is a minor oversight, he will not hesitate to repay the same. He adores doing that and getting befitting attention. And he's always ready to tell his enemies everything what he thinks about them. Gadget has a big impact on him. The MADgician reacts aggressively to being called a "Lovely assistant" and he is afraid of his old magic closet.

The MADgician talks with a loud, hyperemotional melodious voice most of the time, laughs madly, makes strange and lightning-fast movements, without explaining their sense to anyone. That's why nobody can't predict what crazy or stupid thing he will do next. Despite that, he is smart enough and will figure out how to defeat enemies once and for all. Another question is whether he will succeed.

The MADgician is shown as the most creative character in the 2015 series. So, his main weapon is his head. He will come up with plans that will never occur to others, and these plans work quite well. But besides this, he is an experienced illusionist and uses magic tricks, agility, speed, and acrobatic stunts to defeat the enemy or hide from a scene. If circumstances turn out differently, he will be ready to fight hand-to-hand. MADgician can get out of locked handcuffs and a straitjacket because immobilization tricks are widely known among magicians. His weapons change throughout the series: in "Operation Hocus Pocus" he uses sharp playing cards and a device that turns people and animals into bunnies, then he uses the cursing crutch, magic wand, and teleporter. His favorite technique is to throw out a smokescreen.

The series mentioned that the MADgician is a physicist. Actually, there were hints that he is an inventor, who made all the strange furniture that Penny and Talon encountered in his lair.

The MADgician was Gadget's college roommate and assistant on magic shows, which they both were organizing to earn some money to pay their way through college. Gadget always treated the MADgician like an animal and always took all the children's applause. Such attitude was infuriating the MADgician, who believed he was much more talented in doing magic, had that flair, but he had the patience not to derail the show and lash out at Gadget, so he always tolerated the humiliation. Gadget always believed that all the anger of his assistant was just acting, and very believable, so he did not take the MADgician seriously. After their parting, The MADgician ended up in the asylum and soon was obsessed with revenge on Inspector Gadget.

Inspector Gadget was assigned the operation of capturing The MADgician who escaped from the asylum. MADgician planned to turn Gadget into a bunny and make him experience the same suffering that Gadget subjected him to, but he was thwarted by Penny and Talon, who teamed up to find a way out maze. The MADgician was captured by HQ agents, but then he reappears in several episodes as a cameo and does other things. In season 3 he met Gadget again and lost to him on one of the missions. MADgician promised to take revenge on Gadget and followed him to New Orleans to steal The Cursing Crutch and to use it to neutralize Gadget`s main weapon - his luck. The MADgician managed to humiliate Gadget and was already ready to curse him twice, but Gadget accidentally jumped on him. Talon took away the crutch and cursed MADgician, who ran away in panic. MADgician last appeared in the very last episode and was blown up by his explosives.

The MADgician hates Inspector Gadget even more than Dr. Claw hates. He has been keeping his hatred for many years. But despite this, the MADgician even tried to impress Gadget and talk to him in "Operation Hocus Pocus". In "Who do voodoo" he got revenge on Gadget, but that wasn't enough for him. The MADgician wants Gadget to disappear permanently.

Dr. Claw is the only person whom MADgician respects and obeys. 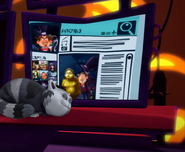 The MADgician dresses up into a new character so that no one can recognize him.
Community content is available under CC-BY-SA unless otherwise noted.
Advertisement