Talon is the secondary antagonist of the the 2015 series. He is William's cousin and Dr. Claw's nephew, who works as his main right hand minion on his missions.

Talon is shown to be a 16-17 year old boy with dark purple hair (dyed; reverts back to black when wet) and brown eyes.

In his first appearance, Talon had his black hair combed down, and he was wearing a white shirt, a dark grey jacket, blue jeans, and black boots. But after revealing his his true self, Talon began combing his hair up, and started wearing a dark purple hoodie jacket with dark/light purple striped sleeves, light backed, dark palmed purple gloves, dark purple pants, and light purple striped dark purple boots.

According to Penny in Operation HQ Reunion, Talon has dimples.

Talon is sometimes in charge of his uncle's plans to take over the world, but always fails thanks to the interference of Inspector Gadget and Penny. He often tries to point the easiest ways to fulfill his uncle's dastardly plans or a flaw in them, but Claw never listens and does what he wants instead. When the plan fails, Claw usually punishes Talon and blames him for everything.

Talon is very vain (patricularly about his stylish hair) and self-centered, but deep down, he is somewhat lonely and insecure about the abuse that his family gives him, and just wants them to be proud of him.

In Midnight Madness, his fear of baldness is revealed.

Throughout the series, it is shown that Talon has a crush on Penny, and vice versa, despite the fact that they are both are enemies like their uncles. They often try to impress each other, only for their plans to backfire, thanks to Talon's pathetic efforts. In Towering Towers he saves Penny, but in other episodes, he has taken actions to endanger her. 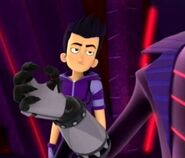